Naturally, with the luck I carry in life, I have got stuck in the big “snow fog story” holding Heathrow in a sleeper hold for the past few days. I am quite happy though as it has given some excellent examples of interaction between users and companies on Facebook.

Some companies have worries when starting their Facebook pages. They think that this will lead to crises they cannot handle. They think the burden will be too big. For those who use a time consuming setup, I am sure that this is also the case when all hell breaks loose. However, if you look at the feedback on Facebook to the airlines, all is not hell right now. It is clear that people are pissed about two things:

Without Facebook at least one of these issues would never surface. Rude employees would never tell their supervisors that they are worthless, and although there might be some complaints about it to customer care, it will probably not give the full picture. The positives wouldn’t have been able to surface either. Only someone with a serious complaint reason would sit the 2 hours in line to have their say.

The take from this is that:

One of the things we all talk about but there isn’t too much written, is the phenomenon of users acting as experts. This is highly useful and I will give you an example from Lufthansas page below.

Elchin writes to the supervixor Alexander on the Lufthansa page: 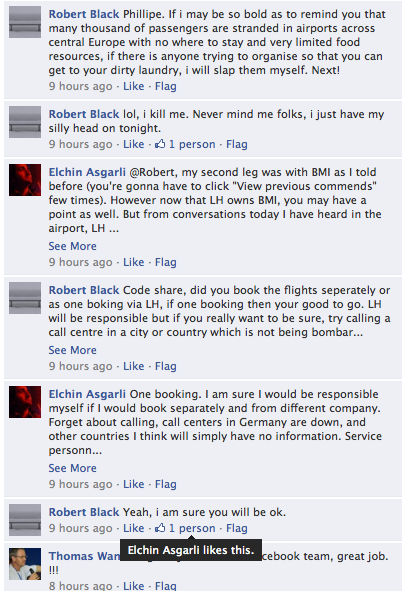 Robert solves the problem for Elchin and Elchin likes Robert as a response. All of a sudden a crisis has turned into a bond between two users. You might be thinking “yeah, what kind of bond is that… digital.. huh.. haha.. not worth a dime”. But… think of it this way. Elchin had the mindset of anger when he came to the page. Enter Robert who solves his problem. All of a sudden Elchin is not angry anymore and thus the experience on the Facebook page, and of the company is bettered. Instead of hate, he feels satisfaction.

#3. One to one responses

SAS does a classic customer service setup on Facebook. They respond to each question posted on the page individually. They seem to have standardized the answers and they don’t seem to reply to follow up questions. I think that this is a good exercise if you feel like you have the resources to do this.

The questions become more customer care related and more specific if the user sees that they can focus on themselves and not on the general situation. This is a key take away.

I think this is important to keep in mind as you might only want one type of questions and might work in sectors where you do not want personal questions on the FB-page. (Thinking banking and insurance here…). Given the examples displayed this past weekend, I think I will start experimenting with recommending a more passive hold for those companies who cannot support certain kinds of questions on the FB-page as a result of legislation etc. I don’t know, what do you think? 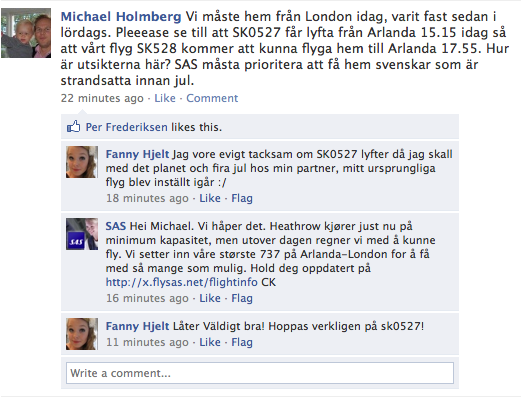 The example above: Michael needs to get home with a specific flight from London. He puts it to SAS by using the “why don’t you prioritize swedes” argument.

Fanny jumps into the discussion and gives Michael her support as she is getting on the same flight. SAS responds by saying that they hope so, but that Heathrow is running at minimum capacity (ie. blaming Heathrow for the problems). Then SAS ends of by saying they will put their largest 737’s in action so that they can bring home as many people as possible. Then gives an update link.

I would say this is a pretty nice way to act as it sort of solves the problem for the moment without actually saying anything than what is already commonly out there –> No one knows what’s happening!

However Fanny seems to like it, so I guess it is a pretty good strategy.

I don’t really know what United Airlines have been up to lately, but they sure as hell need to get the marketing and the communications departments to start working together. Below is a screen dump of the landing page they are currently using in the midst of the crisis. Suggestion: 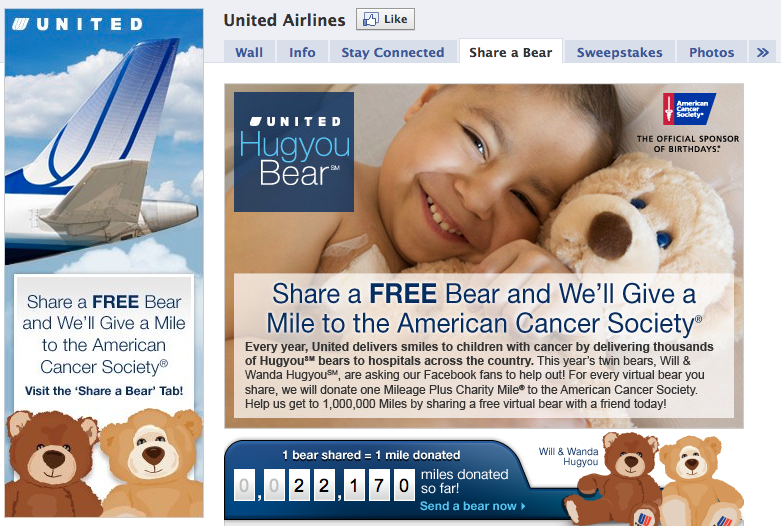 British Airways has a neat solution to information co-ordination problems. They have syndicated their Twitter feed onto Facebook which really shows the users where to be at in order to get response to their questions. They are using this feed as their landing page giving it a real time and urgency feel. In contrast to United Airlines they can mix promotion with service which is a really neat way of taking care of two “problems” in one go. 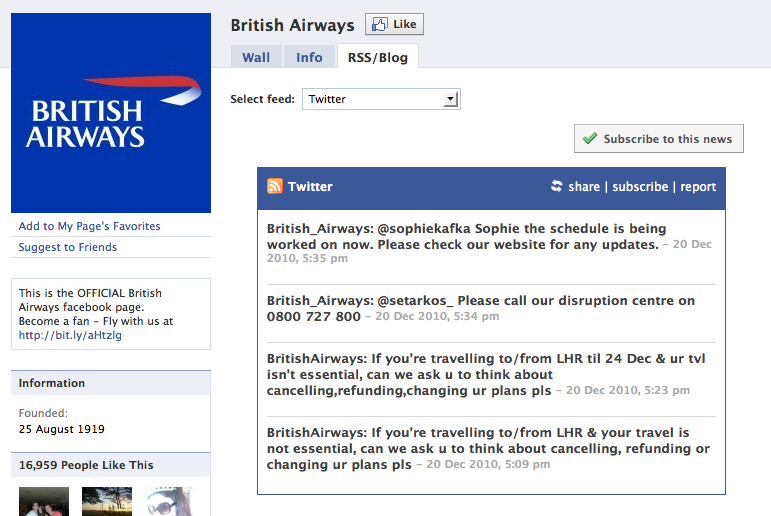 What else is out there. Please write blog posts and write about your experience. Link to this blog post and I’ll accept your track back below so that we get it all collected in one place. (Yes, that might be interpreted as a link bait, but yes, I think it makes sense this time.)

So what’s your story?