As you all know, I don’t care too much about rules when I test the boundaries of what is doable in the online environment. Today, I got busted in one of my attempts to create a viral video. Here is the story.

I saw a clip about a boy who hit back on a bully. It was a very engaging clip and I most sincerely thought that it had the potential of going big on YouTube if remixed into a more aggressive format. I was correct. In 24 hours the clip had 643 organic views, and in 48 hours it had 4100 something views, and thus showing an exponential growth curve, indicating that it was about to blow up.

As you can see from the curve below it is showing a viral pattern, meaning a positive acceleration. (If a video turns viral this curve will eventually turn into an S-Shaped curve as it moves towards filling the quota/population share of its full potential.) 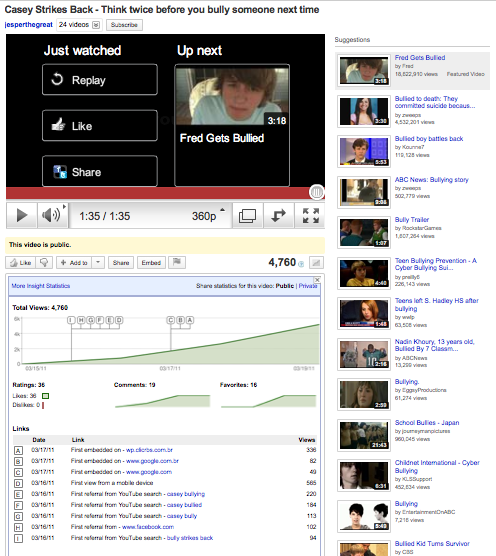 I had optimized the title of the video so that it would turn up for searches about bullying and getting back. As I have a pretty well visited and linked YouTube account, it didn’t take long before my video started showing up in searches. 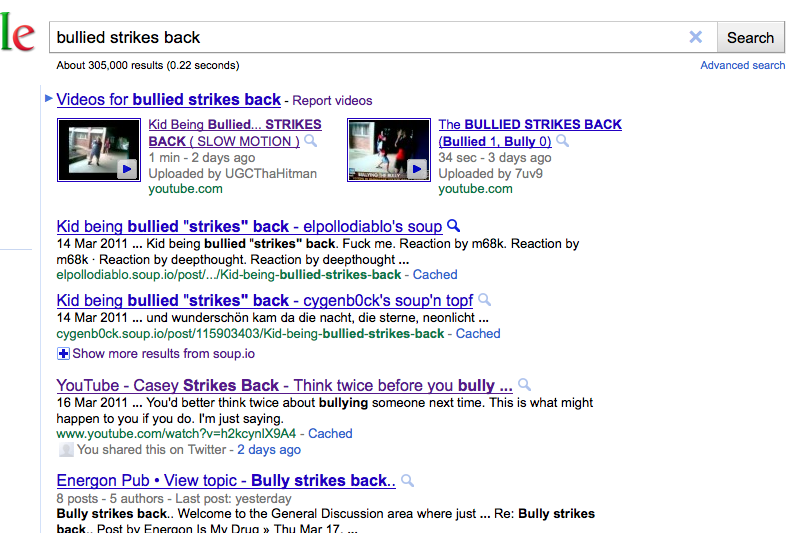 This optimization also showed some initial results in the insights available for your YouTube vids. YouTube shows what keywords and searches you show up for in your insights section of each video or in your admin/my videos section.

How I did the remix

I basically downloaded the clip you can find here about Casey being bullied and striking back. Then I downloaded a tune called Bully by Eminem from YouTube. I used iMovie to detach the sound from the Eminem video and attach it to the Casey video. I posted three commenting slides, “What every bully should think about”, “Daang, let’s see that again” and “Thank you Casey!”.

The first copy was to set the right frame of “revenge” yet tap into the bully motion of the online environment. The second one was to pitch the video to the aggression within youth. Celebrating violence can really make anything go viral. Sadly enough. The last one I wrote in order to get back to the core message, also making the video possible to share for people who do not enjoy watching violence, but who do want to support those who are bullied.

I then optimized the video in the title, the description and by posting it into a much less popular category – education – in order to get it on a toplist fast if it would show signs of growing. This is a trick that should not be forgotten. Don’t put your videos in the entertainment category. There is simply too much competition there.

Anyhow, here is what I ended up with.

Third day of my test and I receive a message from YouTube with the following text:

Naturally I wonder what in this video would be against the Community Guidelines. Yes it does include violence, but there are loads of other videos on YouTube that are a lot worse. It might be that I used Eminem’s copyright protected song, but that might not be it either as Eminem is one of those artists that don’t have that many restrictions on their content. I am not too sure what exactly was the reason, but it might as well have been the hostile comments posted. Sadly I didn’t have time to take a screen dump of them but they were basically about “he should have stomped his head as well”, calling out for Casey to finish his bully off.

One thing I do know is that it was not my content to start with, however I optimized it and remixed it. It was not my music to begin with, it was only a remix. Perhaps this is why they removed it. I suppose it was a close call and that this penalization is generated by automated algos, rather than from a person viewing and disbanding the content.

The only problem I see with YouTube’s action is that they seemingly remove content that is ok:d by the users. They are taking on a role where they decide what content is inappropriate or not. They didn’t remove me because of copyright problems, that looks differently. They removed me because the content was offensive. However, I didn’t get a single dislike on the content.

As you can see from the screen dump above, the video has 36 likes, 0 dislikes, 19 comments and 5700 views. Within 48 hours. That seems like a pretty popular content rather than a very offensive content. I will ask YouTube about this and see how they respond.

Do they impose censorship although the content is not offensive to the users? Can violence be liked, and not offensive? I am unsure about the consequences and the analysis at this moment, but I will continue to update this post the more information I get.

Lesson learned. I have to continue searching for my 1 million views video. This one truly had the potential, but next time I’ll try to put some content up there that has a better structure and that also complies to YouTube’s guidelines.

What can you learn from this little experience I had. Basically two things.

2. Always post your own content… but that one is pretty simple for you as that is normally all that you do. However, try to include what is being hot right now on YouTube in your content so that you engage people. Perhaps not as direct and violent as I did right now, but get within the groove and you’re be more successful than if you just post your commercials.