It seems as though the more popular you get, the harder you have to work. Facebook has recently made some change to its edge rank making it difficult to grow as fast as before. I am still unsure what this update is about, but it most definitively have to do with change in frequency. Ie. if you post a similar number of posts at about the same time every day, you should have no problems with this – what it seems to be – new filter.

However, if you change it around, post at diferent hours of the day, or change the number of posts you are posting. More or less. You will end up with considerably less visibility. Perhaps this is all about my own paranoia, but if you have your own examples, please share in a blog post explaining them.

Example 1 happened on the 15th of March

The first example actually happened just a few days ago. I had a break in posting to one of the pages I administer for one day. The next day, when I posted to the wall, the number of likes, shares and comments were CONSIDERABLY lower. I waited a few days to have the insights update and noticed that the metric for “People talking about this” had been completely depleted that day.

Now, I am aware that it has to do with my posting creativity as well. However, this kind of radical change usually only has something to do with a change in some technical change. I mean… people were still talking about us, so, it wasn’t zero. However, it was considerably less.

In the above graph it is the second tip I am talking about. The first dip is explained by a stop in advertising and a start of organic page building tactics. (Yes. the look of the second part of the graph is what organic fan building should look like.) It is the second dip that is interesting in this case. You can first see that the member generation – “New likes” – curve is slowing down, then the “People talking about this” curve takes a sharp dive only to even out.

Remember – the Like-curve doesn’t show aggregates but the increase. Thus, if we would have a week where we would loose fans, the curve would be below the line. The “People talking about this” curve however is an aggregate. I cannot get anything out of it more than the rate of change in fan aggregation somehow effects your total visibility and that Facebook enacts some kind of filter when this change occurs. I will keep you posted once I get more data.

Example 2 happened on the 11th of March

The second example is more evident. As you can see below this page has a completely different story too it. I was slowly generating fans to the page by constant updates. Then I managed to get one of the posts extremely viral. Considering it is a very niche page, the fan/like count doesn’t increase relative to the viral expansion of the talk about the page. Ie. people might be talking about an image I posted, but they aren’t necessarily interested in becoming a constant follower of the page as what they liked only was relevant in a specific context.

What is interesting here is the sharp dive in the “People talking about this” curve. It was only one post hitting it big and it is as though Facebook just decided to filter it after about one week. This was on the 15th of March that the stats all of a sudden dropped. 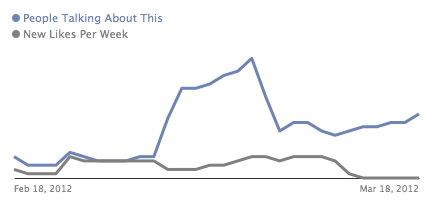 Two days later, my steady influx of new likes decreased from approximately 100 per day to almost zero. I am scratching my head as to why. You can see I have managed to get the talk going again, but the number of likes tend to stay the same.

Conspiracy – not likely – but anyhow, here it goes

The conspiracy side of me wants to take this personally as this coincides with the behavior of a very negative post about Facebook I wrote on the 8th of March. I know it probably has nothing to do with it, but considering all of the pages I manage started showing wicked results – including my personal profile – after I posted that story to my own profile, I can but wonder.

For example – and still just saying, not accusing – the day after I posted the negative link to the FB-platform, some of my profile updates were filtered out by Facebook. This was on the 9th of March. Ie. I posted stuff to my own timeline that my colleagues couldn’t see when they visited my timeline. I know I am spammy at times, but Facebook please, before you enacted that filter, I had fun on Facebook getting some interaction going… and isn’t that the whole idea of it? If I post a lot and get a lot of interaction going… then why filter my posts? I don’t get it.

I don’t believe it is connected to what is happening on the pages right now. But what is evident is that Facebook is messing around with their Edge Rank or filters in one way or the other. As I said above, please share your examples!