As if you didn't already read all the blog posts about it. Local Deals have been announced by Facebook. What a shocker... hehe... perhaps not. But however expected the launch of this product is, it is really cool that they are actually doing it.
Tweet

As if you didn’t already read all the blog posts about it. Local Deals have been announced by Facebook. What a shocker… hehe… perhaps not. But however expected the launch of this product is, it is really cool that they are actually doing it. They are connecting the offline to the online in a way which Google Local Business center never will. 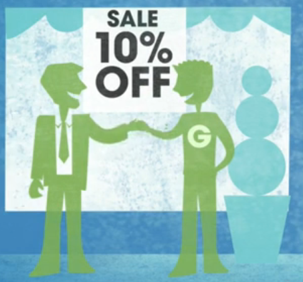 Facebook has gotten one thing right from the beginning. You need critical mass in order to get something to work online. You need to make it a click thing, not a type thing, and more importantly, you need to offer an incentive to the mob you are going to capitalize on.

Basically, Local Deals on Facebook allows you to send push messages to people who check into your store through a mobile device whilst near or inside the store. It will give you the opportunity to offer them a deal on the spot. It will mean a lot to loyalty marketing, very little to attracting new business beyond the most savvy users out there. Yes, there is economy in it, and yes you should definitively get on the train right away. However, you should probably not put your complete marketing effort into this area alone. Local deals have been around forever, and the fact that you put them into a mobile device does not change that.

However, what it does change is the way you can greet your regular customers in the store. Especially big retailers will have a great opportunity to explore here. Think about it. Most of your employees do not recognize the regulars. They simply cannot as the regulars are too many or the employees work random shifts, so they don’t get to know the returning customers.

Here, the Local Deals on Facebook makes perfect sense. If someone checks into your store more than three times a week, or more than the average, then give them a reason to continue doing this. Offer them something such as access to a special area, invitations to events and previews or simply give them a simple discount offer.

The big ones will have problems as well

Which the small ones won’t, and here is the real paradox in this release as the big ones won’t update their existing systems to capitalize for real on this new opportunity. It will be deemed too costly. However, a local entrepreneur might just send out a request on freelancer.com to get a simple crm system up and running so that he or she can tie their local promotions to a coupon or a promotion code.

Cause it is not until you do tie it to some kind of purchase situation that it actually makes sense. This is also why it will not be as beneficial for recruiting new customers. Inflation in supply of offers will take the advantage away over time and thus loyalty will be the only thing that makes sense. Tied to an offer… such as a coupon.

Just imagine what you would do if you would get free stuff from all the places you could check into on your way to work. Simply walking down the street checking in everywhere just to get invited to the next cool event simply won’t make the cash flow for businesses.

It might give them some kind of opportunity to hand out the deal for the day such as “meat about to expire for 50% discount” or hand out real time offers to people who check into a complimentary or competing store down the street.

Competition will be fun

Cause the really cool thing will be when you are allowed to tie your messages to competing business locations. What if you could go “hey, you, if you pop over to me instead I’ll give you a 10% discount”. Now that would surely be of high value to both you as a business owner as well as a customer.

And yes, it will be added spice for creative campaigns

Just think about how much fun you will be able to have. Perhaps not fun that pays, but fun that’s simply fun and brings a smile to the face of your customer. As you know I kind of don’t like that kind of advertising, but still, it is fun and so it should be used as a gimmick if needed. I sure as hell will put it into the toolbox as soon as it becomes available over here.

Without having tried it I feel like it is an excellent idea and although it wasn’t as unexpected as some might want it to be perceived, I am sure that we will see a lot of it in the near future. Hopefully in combination with the possibility to add bar codes, in store positioning and other such great tools to display what’s on offer this week. In other words – love it already! Sort of makes me want to work at Facebook 🙂 (I didn’t say that…) haha…