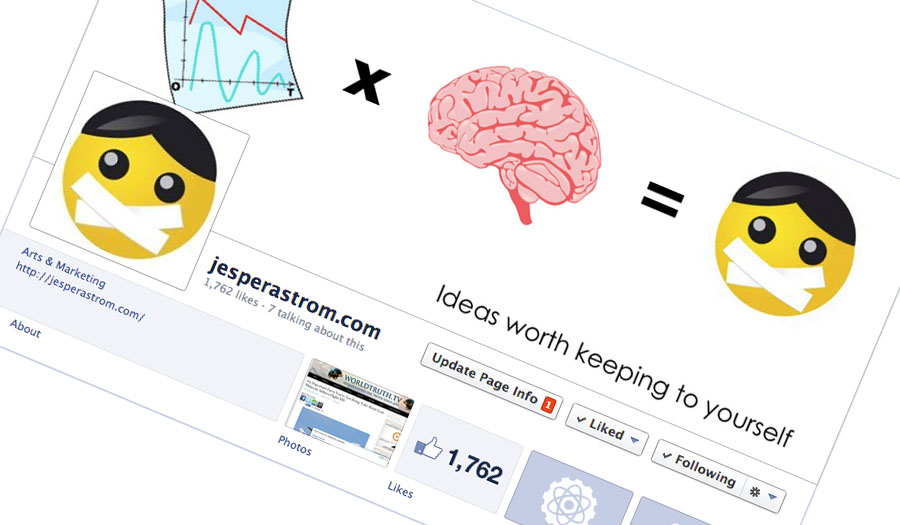 Many have the critics of Facebooks latest changes in post visibility for brands been. But equally many have the defenders turned out to be. The one side says “boohoo, no more free space for advertising”, whilst the other side says “Facebook is not an advertising platform, you will have to do better“. Both sides are missing the point. Most people do not agree with either side.

It is not true that most people want to engage with your brand. It is really not. Most people want to be entertained by a brand. From the 1-9-90 model onwards, all empirical studies have shown that all people have their favorite activity to do in the digital space, and they like to engage with that. This means that a lot of people are engaged – SOMEWHERE – in the digital space. However, this still usually means that they are not engaged in you.

The difference between wanting to be engaged, and liking what you do, are two extremely separate issues. And this is where I am starting to get fed up with the pro-facebook-changes hardliners. Misinterpret me correctly, I LOVE FACEBOOK. It is just that I think they are doing a poor job hiring business developers able to put the money where the company values are.

Cause, why should Facebook be the only one allowed to be lazy?

If they argue that advertising and one way communication is wrong. That content needs to be truly engaging and genuine.. yada yada… then why the heck do they, themselves work on a business model that solely rely on the bullshit they say they are so opposed to? I do not get it. See, this is how it works, Facebookers, and you should know this – If you say something that smells like rotten fish in the connected world, someone will pick up on the scent and stick it too you.

At least advertisers openly admit that they are trying to “build demand” for services they are working for. At least they try to be creative and game the system. But in the case of Facebooks creativity… “let’s expand the ads areas on the right hand side of the feed”… I mean COME OOOON!!!

You have the largest network of connected people in the world, and that’s what comes out of your biz-dev meetings? Or is there a grumpy developer somewhere who is not willing to build what you ask of him or her?

Those were fore revenue driving ideas that came out of my mind in four and a half minutes. And there are a lot of brighter people than me around.

I have met Facebook representatives in many countries. Most of them have no idea on how to use the platform to build truly engaging content. They know ads formats. “Engagement ads”… I mean… come ON… with all the jibberish about genuinity… what kind of name is that for a banner?? Rarely have I met a representative that understands the meaning of how to use your ads formats in combination with other online products in order to create true value to a company.

And here is where I usually bump into problems with the “Brand-hating-squad”. But I believe their view on the world is way too simplistic and not in tune with the complicated lives most of us live. Most people have real problems and are not concerned whether or not a post in a feed is from a friend or a brand. They solely care if it delights them or not. If it touch their space of emotion that generate a feeling in the gut.

With that said. Most advertisers don’t know how to do this. They remain in the “big idea world”, and try to apply it to the fragmented space of the digital context. Which doesn’t work. There is no longer such a thing as 360. 360 takes a message and brings it too a user. The digital and connected space of “always-on”, requires you to meet every online user individually, and there is simply no way to do that with big-idea-communication.

Instead, you need a platform consisting of persistent values and exchangeable tools through which you can creatively respond to, interact with and build upon the requests from the people you meet online.

Yes, you still need your marketing department. But, you actually need to do work, and not hand it off to agencies. Yes, you should still post information on where to buy the product you are trying to sell, and you are highly recommended to do fun and creative shit. However, you also need to understand the user journeys occasionally touching the outer layer of your brand presence and allow those users in.

Facebook used to support this kind of arena. Increasingly so, they are not anymore.

And of course I am a hypocrite!! I sell services that help companies do this. However, I know that side of my business is out the door soon, and I fight to get companies onboard for the next few years (that are actually right now), but it is tough when too many companies, consultants and advertising professionals talk the talk, but don’t walk the walk.

So. Mr. Mark. If you truly believe in what you say. Then why not help change the people trying to make this happen? Why should you be the only one allowed to remain lazy when everyone else needs to change?