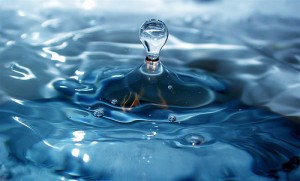 It does make some sense. Considering the static 1.0 web was sort of like ice, not very active, moving or changing. The growth of the web consisted of more of the same kind of web. Just like an ice age. The ice started covering more and more of the earth. Very much driven by exogenous factors such as investment capital and corporations. But then there was light. A crack in the ice. The bubble burst and the technology was freed for people to play around with. 2.0 came as a sunbeam through a cloud and heated the ice.

Along came the liquid web. Electrons, now moving faster than in the solid, represents the intensified buzz as more people embrace the web as a communicative tool.

The static web was very easy to predict as the change consisted of more of the same. Hence you always knew that if a certain thing happened, then the outcome would be a specific next. Considering how well link spam worked at the time (still works but with altercations), considering the time it took to launch a web project, considering the costs involved. Even the clueless must understand that this form of web, even when involving communication, had to follow certain rules to be effective.

One could chop a piece of the static web and hold it in ones hand and say. I own this bitch. But as the static and solid web has turned into a liquid, the claiming of terth has become a lot more difficult. I mean, just imagine holding a glass of water in your hand without actually having a glass to contain it in. The web has no glass, and just as it is difficult to hold on to a specific molecule of a liquid it is immensely difficult to control where it floats when surrounded by trillions of other molecules looking pretty much the same.

As I have said previously, the web consists of people, content and links between them. That fact hasn’t changed. People are still the protons holding on to the neutrons which in this case represent the content, yet the pace of the electrons – links – have increased drastically. The types of links have also increased. Still a link, but in the context of a user name or a persona. Just imagine, today you link to someone when talking to them on twitter or facebook. The user name is always linked.

So, the components of the web hasn’t changed, yet the energy has changed. The force that was released when opening up source code for people to develop on was extreme and thus the result has been as well.

And when considering the web as a liquid it becomes pretty easy to understand how Google works with content and links and why they choose to rank what they do in their searches. Consider the search query a glass, consider the vertical the lake, and consider the liquid the search result page. If you put your glass in dirty water then that is what you’ll get. And in polluted waters you are sure to get sick from drinking it.

If the web is a liquid it also explains how every single URI moves around just like a molecule of water. The inbound relationships between pages and resources change constantly as the liquid changes due to exogenous factors such as the movement of the moon.

3 thoughts on “The Web is a Liquid”