This blog post is perhaps more about how affiliates have to adjust their business models to fit the social media landscape. Most of them have been spoiled by the simplicity of working in an SEO friendly world, however as SEO is becoming increasingly dependent upon social interactions with users, the affiliates who wish to have a lasting life, might just want to read further.

As you all know by now, it’s the level of gangster rapper in you that makes you succeed or fail in social media. I am going to make 10 strong arguments to why this is the case. But first put on this track, kick back and read this 5 bullet advice stack.

On Saturday (28th of November) I held a talk at Searchmeet in Stockholm arranged by Per, Simon and Johan. They had done an excellent job finding speakers that would compliment each other in a good way and make this the best conference I have been attending for a really long time.

Just press play on this one and then start reading the text below. If you’re one of those struggling “social web advocates” out there. Just keep this in mind whilst on your way to work in the morning. I have this text on the cubical wall in my work area. I read it through every day. I smile at it and I am happy to know that I was late in figuring this one out. Bob Dylan already thought about this soooooo long ago that I wasn’t even born. The times are changing… and even though this is another version than the one that Bob does himself…. since it is evening when I am writing this post… this is the most suitable…

How to create a Facebook Fan Page from scratch. A complete tutorial with images from Facebook and with detailed descriptions on how to do the basic setup of your Facebook page. Facebook pages are one of the key features when engaging your company in social media. It is a simple way to get up and running in a very limited time. This post is the first in a series about Facebook Fan Pages. The index for this tutorial will be listed under the Social Media option in the top navigation.

I wrote my final university paper on fish, eco labels and international trade. I found that fish are fish and thus belong to no one before they’re in the net, eco labels do create some wickeid kind of price premium and it is actually better to invest in industry than fishery in Tanzania.

This post is an attempt to connect international trade of fish with eco labels and social media.

Building links through social media is one of the most difficult practices out there. Here is a little example of how it could be done and what you should think about when trying to utilize the social capital of dialogue marketing for link building purposes.

I know the genuine people out there feel like I am an asshole for writing this post in such a cynical way. However, I am not really writing it for you. I am writing this post for those of you who struggle every day to build links that aren’t happy about your situation and want to try something new. Focus on person and not on page.

The “Jesus Shot” by Tiger Woods is one of the more viral and funny videos from a company in YouTube’s history.

Now, EA wanted to “prove” that there was no glitch in their game, and that Tiger Woods is “Just that good”.

Think again EA Sports. The glitch is not in the game. It is in Tiger Woods, and one of my golf playing friends had the decency to bring this to my attention. 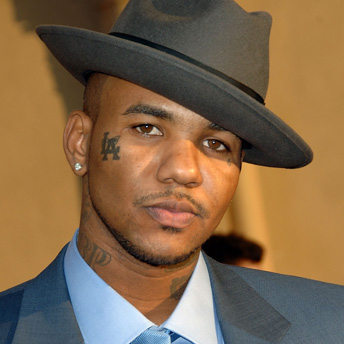 The Game, the husstle, the folding of the sleves, the pick it up from the ground and brush it off. There is nothing with social media that changes the basics of YOUR daily work. It is what’s around you that has changed. I made an analysis of social media the other day and I sort of stumbled over a way to describe this change that everyone is talking about.

I decided to split it into three areas of interest or historical context. The production of media, the consumption of media and what influences us as human beings.

Mass media has however never been MASS media as the production has been primarily controlled by institutions such as news paper, religious institiutions, churches, corporations etc. Production has been expensive and has thus been in the hands of those who have had the money to produce. Reach reach reach reach. If someone starts talking bach you reach a little bit more and you simply crowd them out. In some instances, you enforce rules to control the production.

There has been a debate with regards to whether or not social media is the death of email or if the two live in a symbiotic relationship with one another. As an interesting piece to the puzzle, Nielsen Online published an article about one of their studies on how social media effects the usage of e-mail.

What they found was not quite what you might expect as they could see a clear positive relationship between the use of social media and the consumption of email. If you have time to critically examine this statement, then visit the article through the link above. All others – eat this table taken from that article. 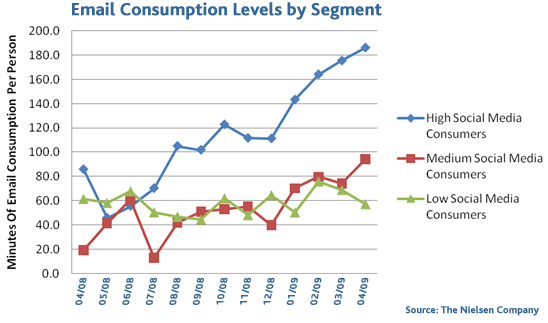 Source: The Nielsen Company – Is Social Media Impacting How Much We Email?

This relationship speaks in quite the contrary direction of what many hard core talkers in this field are suggesting. But how can they be so wrong? They are journalists, consultants and everyday users of these tools. Why is it that their analysis of what seems to be, or logically might become, in dire contrast with what the data tells us? I think the problem is that they are neglecting the shift in purpose for email.