I don’t know if there is anything called expectation inflation, but there is something in the way we perceive satisfaction that makes us react to change rather than feel constantly satisfied in a non-changing environment. Think of it as three states. 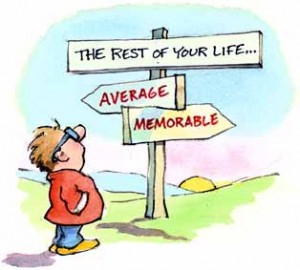 Now, let us dissect these three states. For this practice I will use income, but you could think of marketing efforts, dialogue efforts in social media, and even inbound links to a website through the eyes of Google. These are general rules that come out as logic to you as soon as you start thinking of them.

Let’s say you have a steady state of income. This income will establish some kind of budget behavior. If your income stays at that level it is probably quite reasonable to assume that your budget and spending will remain constant. There might be changes to the way you prioritize different goods, but the limits under which you prioritize are held constant and thus your behavior is constraint by these limitations.

Now imagine all your needs aren’t satisfied at this level of income and you get a small increase in income. This will most probably induce some kind of increase in your budget spending and it will be felt as an important change for you. You will evaluate this sense of improvement as something positive. Equally, if you for some reason would get an income cut, you would experience this as being something highly negative. You will eventually get used to this new state of income and the sense of satisfaction will turn into a sense of normality and thus not feel as improvement, rather it would be expected.

Now consider the situation where you have needs that are exceeded by your income by far. That most of your income goes into the piggy bank and you really don’t need it. Even though you might get twice the increase than the example above, you wouldn’t get twice the satisfaction. You would rather feel a lot less satisfaction. The nominal change in income was greater, but the utility at which you made use of this change was a lot smaller. You would probably not change your budget spending and thus you would be only marginally affected by the change.

How to make use of this knowledge

Many social marketeers try to reach for the skies by contacting the super bloggers who have a lot of readers. What they do not realize is that these bloggers already have a lot of focus on them. They receive money, and they receive attention with an abundance. They do not need more of the same and so you will have to give them a HUGE effort to make them feel satisfied.

Especially if you put into perspective the comparatively minimal effort you have to make when talking to a blogger that receives hardly any attention by marketeers and other professionals. Now, you might ask yourself about what kind of utility contacting a smaller blogger would bring to your business. Well, basically, it gives you hardly nothing right away, so if you are looking for direct payback, you should go for mr expensive.

However, if you are building your brand over time, you will do a lot better if you contact the smaller bloggers who are relevant to your business rather than staring blindly at who’s hot for the moment. Not only because you will be able to work with them at a much more considerable price, but because they will feel a much greater sense of satisfaction regardless to what you offer them. And yes, there are other aspects to it as well. If you help them build their platform you will have a great leverage to launch from in the future as well, but that’s for another blog post. Now we’re talking utility and you will do a lot better with the smaller bloggers than with the bigger ones.

I would say you’ll get an increasing returns to scale on every invested dollar in a small blogger, as the rumor will spread that you are reaching out to quality rather than quantity. You engage where most interesting for your brand, not by the rule of popularity, but by the rule of focus. Perhaps those last few sentences don’t make any sense, but they will if you read later this month.

Now, apply this to other relationships than the ones you have with bloggers in the social media sphere. Your income currency now is attention and recognition. Who can you exchange your newly found currency with and get the best return on investment. Try it out, plug the numbers into a graph and calculate where your ROI hits the steady state level.

And the same goes with links and Google

Now, most SEO’s aren’t that unfamiliar to changes in the SERPs due to change in inbound links over time. I regularly play around with behavioral economics and SEO as I have some kind of sick idea about Google aiming to make their bot as close to a human as possible.

If you look at the influx of links to a website, you find that even a weak website can rank for a keyword for a while if they receive a sudden increase in link juice to the web page covering the topic. Now, if you apply it to the reasoning above, Google will only improve your rankings for that keyword if the rate of change in inbound links, increase. Thus, the acceleration of inbound links are more important for a positive ranking change.

This is nothing new, or strange, but when applied to the thought process above it could give us some key insights on where Google is taking indexing and search results. Google expects some domains to deliver highly linked content, highly qualitative content, etc. and thus ranks new posts and pages from that page at an unreasonable high serp position (even if off topic) at first. If the link influx is less than what is expected, the rankings are decreased as a result, if they are more, the ranking will increase the SERP position of that page. More importantly, if there is no change over time. Ie, the second derivative of inbound links is not positive, then the website will probably get a lesser ranking to those web pages with an accelerating influx of inbound links.

This also derives the notion that a website with a lot of links, but with no increase in the inbound link influx will get a more and more narrow serp performance, only ranking for the narrow terms that it was ranking for when having a positive (meaning accelerating) second derivative to its inbound links curve.

So, what have we learned today?

Well, I do not know if we have learned anything else than that you like stuff you have a scarcity of more than that you have an abundance of. I could go on forever reasoning about this, but please write your own reflections on the topic in your own blog posts or in the comment field as there is so much to this topic that I am falling into pieces.